It seemed like an easy job. I just needed to disconnect two pipes, plug them, and pull the water heater out from under the yurt. The project started when the water heater breaker tripped, and when the pressure relief valve started dripping, costing us 1,000 gallons/month for several months. 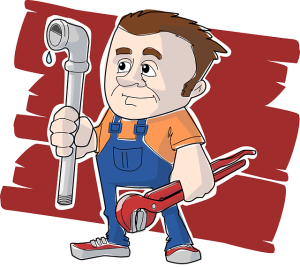 My attitude in life tends to be “anything is possible”. Even though I didn’t know the first thing about fixing our plumbing problem I knew I could fix it. I thought it through and came up with an answer: have a plumber or handyman do the work, probably having to replace the water heater.

Lack of know-how still was an issue. So, I reached out to a retired friend who’s a brilliant plumber for suggestions. He got me started with what parts I’d need from the hardware store. The nice man at the hardware store helped me find the parts I wanted. This was working out smoothly, so far!

First, I had to cut the water heater’s 220 line. Intellectually I knew that was a safe action: the breaker had tripped *and* been removed. Emotionally, I was terrified! I’d shocked myself as a 4-year-old and to this day am anxious about even touching the prongs of an electric cord that’s not attached to anything. It took quite a pep talk, first by me and then by my husband, to cut that line. But, I did it. Success!

Disconnecting the lines from the heater was a bit harder than anticipated. Between the 16-year-old connections and the cramped space I was working in, I had to leverage my strength to break them free. Success!

Not success. The plug I bought didn’t fit! It was too small. I called my plumber friend again. I warned him I didn’t know the proper names for all the parts we were going to discuss, so I’d use girl words and hope he could translate. When I mentioned the hose end coming out of the water heater, he rolled on the floor laughing. I still don’t know the name for that piece, but I knew what to do with it. By grabbing another wrench I got back to work to remove that piece from the water heater. Success!

Ick! No wonder the water heater had so many problems: the intake line was filled with mud. I started doubting we’d easily get the water heater removed. The water heater’s location caused challenges with getting the plug, the “hose end”, and the nut all connected on the waterline.

That’s when I needed to call in for reinforcements. My husband. He’s a tall guy and fitting into the cramped space was hard for him, but he willingly came to help. The water heater needed to be pushed out of the way. So, Randy pushed with his feet while I leaned against his back to brace him for maximum force. Whew! That worked. But I still couldn’t make the pieces align properly. But Randy could — and did.

Four hours later the yurt had water again — with no drips.

I’d figured pulling the water heater out would be the hardest, but with two of us, I figured it was doable. I was right with my first reaction, but all the optimism in the world wasn’t going to make the second part happen. Maybe it’s because we were tired by then. Maybe it’s because of the tight quarters it is lodged in. Or, maybe because it’s mostly filled with mud and therefore weighs more than the two of us could manage on our own. Either way, the water heater is an artifact under the yurt.

I took the simplest path in fixing my water heater issue. My positive attitude and determination helped me accomplish my goal — with aid from others. The teamwork with my husband was excellent; our respective strengths blended to get the job done.

Do you face difficult problems and work through them, or do you give up or let someone else handle it?

The hours on this project in cramped quarters doing strenuous work with muscles that don’t get used like that often took their toll on us. Though I was a bit sore, I wasn’t as sore as Randy. I think it’s because I do my 14 Moves daily and he doesn’t. If you want to follow a simple routine anywhere you are — with no needed equipment — so you can be stronger and more flexible and agile, then treat yourself to my 14 Moves Chart.