As a senior in high school, I learned a lesson about fear, though I couldn’t have told you that was what the lesson was at the time. And the fear was buried within a symptom we usually don’t think to associate with fear. 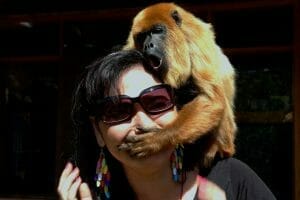 Our house had a wonderful boulder buried in the backyard — off the patio and right outside the dining room windows. All the kids in the neighborhood loved to play on the boulder, crawling around it, jumping from it, and hiding in its many hollows. As my family sat down to eat one night, several kids came to play on the rock. It was summer so the windows were open. Their squeals of joy, their peals of laughter, and the hollering that goes on when kids are having fun filled the dining room. It was so noisy we couldn’t hear our conversations around the table.

I went to the windows and gently suggested that the kids come back later to play because we were eating and couldn’t hear ourselves over their commotion. They understood and ran to another neighbor’s playground to continue their fun.

My mother snapped at me, saying that we don’t talk to people like that. I objected with the reply that I was kind to the kids, they understood, and now the family could eat and talk in peace. Nope. That’s not how we talk to people. She settled for their noise so as not to offend the kids. These are kids who could benefit from a lesson about consideration and respect. They weren’t being bad. They were being kids. And they didn’t know we were sitting to eat right then.

It took me years to understand that my mother was so afraid of what others would think of her and might not like her if she spoke her truth, that she’d become, what I called, “the world’s best doormat”. And she expected us to be like her. I didn’t follow in her footsteps completely, but I too have settled for too many things in my life. I’ve settled out of fear of the repercussions or ramifications from speaking my truth, as she did that evening.

Where do you settle in your life? I suspect there are several areas of your life that you settle for less than you deserve or want. You may have to dig a little to see it, since it can be subtle, not necessarily like my mom’s! Are you ready to quit settling? Or, do you want to settle for settling?

These are important questions for you to evaluate and plan for. The world isn’t used to you being empowered, at least in the areas you’re defining and with the people you are recognizing from these questions. I know from personal experience that when I haven’t thought about how to approach a situation before speaking, and planning the best approach, that when I speak up I overdo it; I end up swinging from one extreme — settle — to the other — roar. That can be startling, to say the least, to the recipient of my communications and can backfire on your intentions. You may find that to be the case for you, too, as you learn how to stand up for yourself.

Institutions Can Settle (or not!) Too

There’s a story that I heard from both my mother and grandmother about a bit of Boulder’s University of Colorado history. My grandfather, a professor there at that time, was proud to have taken part of this bit of history. What I’d long heard was about how in the early 1920s the University was tight on money. The administration brought staff and faculty together to help be part of the solution. After much discussion, the consensus was to lower everyone’s salary rather than lay anyone off.

The rest of the story came into my mailbox last week in a note from CU’s current president about how the CU campuses are rising to the challenges brought on by COVID-19. He tells the story of how in the early 1920s the Ku Klux Klan controlled the Colorado government; they were stronger in Colorado than in any other state and were really flexing their muscles here. The KKK factions in the Colorado legislature threatened to cut off state funding to the University unless then CU President George Norlin purged the faculty of Jews and Catholics. Norlin stood firm and the University survived without those funds and with its values intact. All this time I thought it was the depression that had crimped the budget!

This story is a wonderful one to highlight the power of not settling. Settling in this story would have lead to President Norlin caving into the state government bullies in fear of losing funding. Not settling and taking action resulted in the University pulling together its people, thriving, and keeping its values intact.

That last point probably is the best point to be made about overcoming your fear as shown by settling. When you settle you don’t keep your values intact. Keeping integrity with yourself is important for maintaining your sense of self-worth and pride.

That’s a powerful way to be your best.

Don’t settle. Get to the issue behind your fear and work to overcome that. You owe it to yourself to be your best, and that means standing up for your rights and values.