When I repeatedly hear reference to the same thing, be it a book, person, or technique, I pay attention. The most recent thing I heard repeatedly was a technique to harness the alter ego to help buoy yourself in uncomfortable or difficult situations. 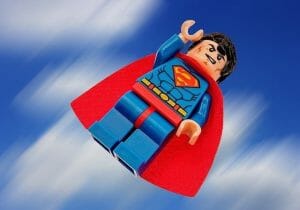 For several years that’s been part of my coaching practice — to teach clients how to use their most courageous, Future Self to stand at their side to give them the strength to address a difficult situation or conversation. That Future Self is strong and happy, giving the client a well-rounded sense of support. The Future Self supports and guides the client through challenging situations as needed. That said, a coach is still needed to show you the blind spots that neither the Self nor Future Self can see.

Over time I have even suggested that Future Self be the client’s superhero so their support system has imbued superpowers that the client doesn’t think they have but can access through that superhero. I further coach them to have that superhero be positioned at their elbow, or just behind them — like an interpreter might be positioned — or shrunk in size and placed on their shoulder. This kind of positioning lends courage and coaching as the client needs it in difficult situations.

Wouldn’t you know it, one of my coaches uses a similar technique. He coaches us to identify the animal — the predator — we identify with and want to channel when we need a stronger persona. He asks us to choose a predator because he wants us to take on the strength that animal has so that we can be winners. Though I haven’t yet connected with my predator, I understand the concept and feel the power I’m intended to get.

The third technique employs the same concepts as discussed above, with a twist. This technique is to channel or adopt an identity different from your own. That identity could be a superhero, a sports or entertainment star, your favorite role model, or even a villain that possesses the characteristics you feel you want in specific situations. Heck, you might have different identities to channel for different situations!

This technique, in any permutation you use it, lets your alter ego step in and act for you. That takes you off the hook for feeling weak, taking on criticism, making mistakes, failing at what you are doing — or any of the other reactions you fear. Your Alter Ego doesn’t care so let it take the bullet for you.

It’s interesting to learn about the public figures you know who use the alter ego technique to be an actor or star athlete or to speak on stage. These figures effectively hide behind their Alter Ego and let it do what they want to do but are afraid to do. And look where that’s gotten them — into the limelight, generally with great success! Isn’t that what you want in your life, to have great success at more things?

Often I see people striving to be chameleons, blending into their environment and proceeding through life in a way that asks to not be noticed. Sometimes that’s important to do, to be sure. But often it’s as much as hiding from ourselves and perceived weaknesses as blending in.

Could it be useful to have your Chameleon Ego and Alter Ego work together to make your life all that it can be? I’m thinking it would be.

Your Chameleon Ego (let’s call him Clark Kent) can be the you that operates through the day, taking care of daily chores and activities. Your Alter Ego (let’s call him Superman) can be at Clark’s side for support and guidance. When a stronger personality is needed than Clark offers, Superman can step in and take over. What teamwork! And when Superman’s work is done, Clark can step back in and take over the routine interactions. Superman does the strong-back-bone work that would wear thin if present all the time. Clark does the more “mundane” work of existing and is easy to take on a daily basis, but ineffective when it comes to life’s challenges.

Let me share an idea that could twist your brain in a knot as it tries to work through the idea. Could it be that Superman is the real you and Clark is the persona to help you fit in and feel accepted? I heard this concept from Todd Herman, author of The Alter Ego Effect. Let’s look at a fictional alter ego and chameleon ego you may know: Spiderman and Peter Parker. According to Todd’s way of thinking — and I’m liking this concept a lot — Spiderman is the “real” person, not the alter ego, and moves through life as Peter Parker, not the chameleon ego, to stay below the radar. That team effort works out well, don’t you think?

To get that higher opinion of yourself, identify both your Alter Ego and Chameleon Egos and let them work together so you can be the best you possible. Like Superman and Clark Kent, you can be the person any situation calls for. Sweet!

That feeling of being more capable will go a long way in helping you lead a more excellent life. What is your Alter Ego identity?